All water used in the plant originates from a number of different wells on MSU property. These wells all draw from underground aquifers and are rotated to ensure no aquifer is drained too much. Each well also has its own unique composition of minerals and other impurities. To prevent these impurities from causing damage to the plant's machines, the water goes through extensive treatment before being used in steam production. The treatment described here is for water that will be turned into steam only, not for the cooling water. For information on the cooling water and its treatment, see the Condensers and Cooling Water page later in the tour.

The water treatment process is currently undergoing some significant changes. Listed below are both the old method of treatment as well as the new method.

The first cleaning step is an injection of a polymer into the water line. This polymer is a coagulant which causes the colloidal dispersion to form larger clusters. These polymer clusters and other larger particulates are removed in the sand filters. The final particulate removers are the activated carbon beds which remove organics. From here the ions must be removed either through an ion exchange system or a reverse osmosis system. The image below is for the ion exchange process: 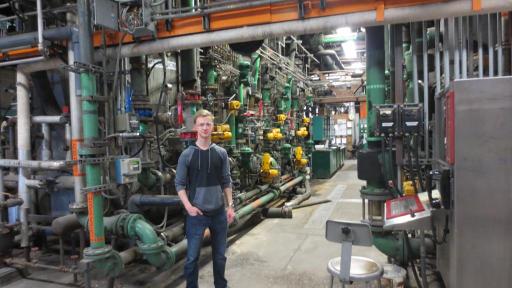 The old method of water treatment utilized an ion exchanger system. This was composed of two systems, an acid cation exchanger and a strong base anion exchanger. Due to how these systems operate, they required large volumes of strong chemicals, such as concentrated acid and NaOH, to regnerate them. They also had to be regenerated quite frequently as they would rapidly get saturated with impurities. These two issues, the frequent regenerations and the large volume of caustic chemicals has made the current system less desireable because reverse osmosis is becoming more economical.
Below is an image of the cation exchange beds as it is still located in the plant though it is not currently in use: 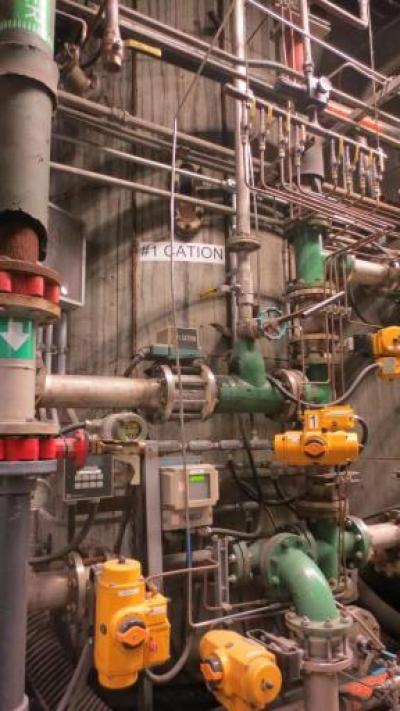 MSU has been testing the use of an RO, or reverse osmosis, water treatment system. This system has been very successful in the test run and has drastically reduced the frequency of cleaning and the amount of chemicals needed. These factors mean that the plant will likely switch over to an RO system in the near future.

Reverse osmosis uses a semi-permeable membrane to remove ions from the well water. Some models also have a pre-filtration section that removes larger particulates before it reaches the main membrane. The reason it is called reverse osmosis is that the water is being driven from an area of high solute concentration to an area of low solute concentration; this is opposite the way the osmotic pressure is driving it and is caused by an external pressure that is applied to the system.

This system has proven itself highly reliable in the current test run and has reduced costs and maintenance in the form of regenerative cleaning frequency. This system also has the bonus of being more physically compact than the ion exchanger system it replaces and having a higher capacity for clean water generation. The only negative is the upfront cost of buying the system and the backup system.

Below is an example of what a reverse osmosis membrane coil looks like; note that this is not the specific type used in the MSU Power plant. This image was taken from Wikimedia Commons and was uploaded by Brian Shankbone with a Creative Commons Attribution 3.0 Unported License. Original location can be found here. 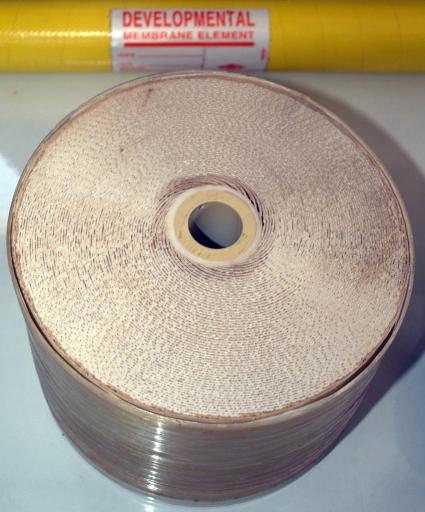 ‹ Virtual Tour of the MSU Power Plant up